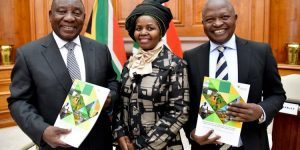 The report of the Advisory Panel on Land Reform and Agriculture will be tabled to Cabinet before being released publicly.

President Cyril Ramaphosa and Deputy President David Mabuza on Tuesday received the report of the Presidential Advisory Panel on Land Reform and Agriculture.

The task of the panel, which was appointed in September 2018 to support the work of the Inter-Ministerial Committee (IMC) on land reform chaired by the deputy president, was to advise it on a broad range of policy matters, including restitution, redistribution, tenure security and agricultural support.

Land reform report to be tabled before Cabinet
It was mandated to review, research and suggest models for the government to implement a fair and equitable land reform process that redresses the injustices of the past, increases agricultural output, promotes economic growth and protects food security.

The panel was further expected to provide perspectives on la
END_OF_DOCUMENT_TOKEN_TO_BE_REPLACED