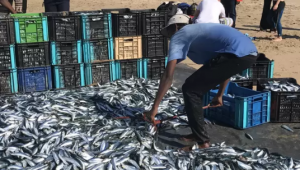 Durban – Sardines have been spotted in Waterfall Bluff in Port St John’s south of KwaZulu-Natal’s coastline.  Ugu South Coast Tourism CEO, Phelisa Mangcu, advises visitors to keep their eyes on the local press and follow the KZN Sharks Board, fishing experts such as GoFish, as well as the fishing charters whose business it is to know the waters and marine life of the KZN South Coast.

“Sardine activity has been spotted further south and even though the sardines take some time to move up the coast, experts are predicting great shoals moving past the KZN South Coast, which has always been best for viewing all the action as well as catching the silvery fish from the shores.”Mangcu said.

After last year’s spectacular Sardine Run, which had the nation’s media on the edge of their seats and holidaymakers hot with sardine fever, the KZN South Coast is expecting another great run this season.

The Sardine Run phenomenon is a na
END_OF_DOCUMENT_TOKEN_TO_BE_REPLACED