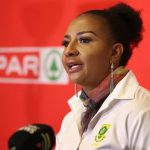 In the complaint, NSA is requested to investigate the president after AfriForum received complaints that Molokwane allegedly misbehave and made racist remarks at the South African championship in August this year in Johannesburg.

AfriForum said in a media statement on Friday that it had delivered a lawyer’s letter from Daniël Eloff, on behalf of Hurter Spies Attorneys in Pretoria, to the NSA’s office in Arcadia, Pretoria, and sent an email to CEO Blanche de la Guerre .

AfriForum does not say in its media statement that it is acting on its behalf.