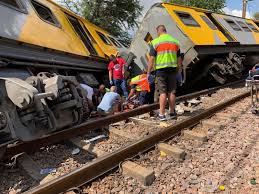 The truth is out. Communication problems between the train driver and Spoornet’s control officer caused the accident at Mountain View when two trains collided.

The train driver apparently requested the wrong authorization repeatedly and wanted to know what the controller confirmed the wrong authorization. Spoornet’s language policy has not been complied with. Speed was obviously also responsible for the accident. Prasa confirms that the part of the track has been hand-made since November 2018 because signals do not work and have not been repaired, and errors have occurred at various levels.

The fact that the signals are not being restored contributed to Spoornet that another million Rand was thrown into the water.