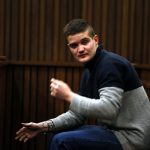 Shocking details of how Nicholas Ninow raped a seven-year-old girl at a Dros restaurant in Silverton emerged on Monday when he pleaded guilty in the Pretoria high court.

Ninow, 21, disclosed what he did to the child when she opened the toilet door as he took drugs, and how he flushed away her underwear to conceal evidence.

In addition to rape, he pleaded guilty to possession of drugs and defeating the ends of justice. He pleaded not guilty to assault. The state withdrew a charge of kidnapping.

In his plea explanation, read by his counsel Herman Alberts, Ninow said on the day of the incident in September 2018, he had consumed alcohol after taking a drug known as Cat.

Ninow said he had also taken “substantial” amounts of the drug a few days before the day of the incident.

“After consuming liquor, I felt nauseous and I went to the toilet. I was para
END_OF_DOCUMENT_TOKEN_TO_BE_REPLACED