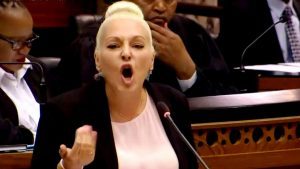 It’s arguable that the best thing about Cyril Ramaphosa’s SONA speech is the debate that followed it: He’s been blasted for using Thursday’s address to “fantasise”, while many South Africans face a harsh reality. However, politicians across the house have united to try and stir the president from his dreams – including Natasha Mazzone.

The DA’s very own firebrand MP has a vicious tirade to share with the National Assembly, in which she found space for several pop culture references. She ominously warned that “winter is coming”, a famous line from Game of Thrones, and her entire speech was supplemented by passages from William Ernest Henley’s Invictus.

Natasha Mazzone responds to the SONA debate
But, when it came to dismantling the state capture inquiry’s findings into certain ANC members, Mazzone dabbled in espionage: She likened some of the claims from the commission’s 10-month life span to a James Bond movie:

“It plays out like a James Bond movie: Trips to Switzerland to fill bank accounts, urgent medical treatment for Premiers alleging that they have been poisoned, stays and spa treatments at the Oberoi Hotel in Dubai for covert business deals to be sealed. Midnight telephone calls in Paris calling off deals for our ailing airlines, to name but a few.”

Natasha Mazzone
Natasha Mazzone was equally unimpressed with the ANC’s contentious choices for Parliamentary chairs. Bongani Bongo, Mosebenzi Zwane and Faith Muthambi have all been given the right to preside over the ethical conduct of their party members – and Mazzone singled them out for some less-than-special treatment:

“I took it as a personal left hook to the jaw when I read with utter disbelief that the very man who was accused of offering a blank cheque to Advocate Ntuthuzelo Vanara, the evidence leader in the Public Enterprises Inquiry into State Capture at Eskom will be rewarded with a chairperson’s seat [Bongi].”

Natasha Mazzone
Who is part of the ANC’s “Zuma faction” in Parliament?
The trio are accused of being part of the “Jacob Zuma faction” which runs in the ANC. President Ramaphosa is having to contend with a highly-divided party, one which still feels a huge degree of loyalty towards the former president, despite his questionable role in state capture.

Natasha Mazzone implored Ramaphosa to find the courage to dismiss these members from the house. Sticking with the Invictus theme, she asked Cyril to become “the master of his own fate”.

“This is the straw that breaks the camel’s back”, Mazzone added, before suggesting that the Parliamentary chair appointments were “one step too far”. The shadow public enterprises minister finished her speech by reiterating that South Africa has an “ANC problem” above all else. Hell, Ramaphosa has one of those, too.

– The South-African
This report does not necessarily reflects the opinion of SA-news.