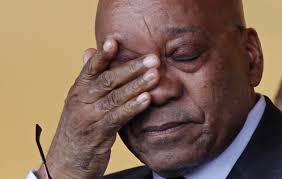 Zuma was also waiting for a court ruling on his application to halt further prosecution in connection with charges of corruption, money laundering and racketeering related to the multibillion-rand arms deal. The French arms firm Thales was also facing charges of bribing the former president for protection from an investigation into the controversial deal.

Zuma’s lawyer and the National Prosecuting Authority were not available for comment on Thursday morning.

In May, Zuma’s advocate Muzi Sikhakhane told the KwaZulu-Natal High Court his client didn’t have the money to finance his corruption trial. He accused the State of trying to squeeze the former president dry through litigation until he couldn’t afford to pay his legal fees.

In December, a full bench of the High Court in Pretoria ordered Zuma to pay millions of rands to the State, finding the former president illegally used taxpayers’ funds to defend his corruption and fraud cases.

But Sikhakhane said his client didn’t have money.

“Mr Zuma remains here, squeezed out of everything he could do. He has no finances, the State has squeezed that.”

He said the State had dragged Zuma through the courts in order to bleed him dry.

Earlier on Thursday, State lawyer Wim Trengove argued it was Zuma who had used the legal system to him to drag the case out, at public expense.

‘I’M NOT SCARED OF DEMOCRACY’

The former told his supporters he was not scared of democracy, adding he would fight it when it attacked him.

“There is no one who scares me. I wasn’t scared of the Afrikaners when they attacked me. So, I won’t be scared of democracy. When it attacks me, I will face it head-on,” he said.

The former president made the comments outside the KwaZulu-Natal High Court in May where he had been fighting for his case to be dismissed.

He told the court he was a victim of a political conspiracy and that he didn’t have money to finance a corruption trial.

This was not the first time the former president spoke about democracy in less than glowing terms.

While speaking in Parliament in 2017, he raised many eyebrows when he said: “It’s a funny democracy that says punish a person before they make a mistake.”

Zuma said he didn’t know he would struggle fighting for freedom only to continue struggling even after the fall of apartheid.