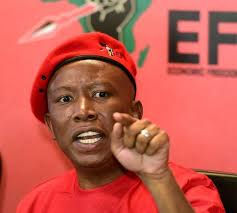 EFF leader Julius Malema told EFF supporters outside the Newcastle Magistrate’s Court in KwaZulu-Natal on Monday that he was craving for white people to work for black people.

Maleme briefly appeared in court on Monday on charges relating to the violation of the 1956 Riot Laws Act. He was charged with encouraging EFF members to illegally occupy open ground. Malema is accused of incitement.

This speech follows after the EFF requested its members gather outside the court where Malema would appear. Malema therefore repeatedly mentioned that he is not afraid to go to jail if it means he must fight for his country.

According to bystanders, Malema’s statements were welcomed with a loud applause. “I don’t want black people to work for white people. I want you to work for yourselves; white people must work for you. This will be true freedom. You have to teach them how to carry babies on their backs. They must feel what our parents felt, “he said in his speech.

The original article can be read in Afrikaans on Maroela Media