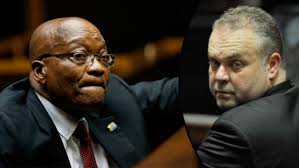 The startling allegations Radovan Krejcir made against Jacob Zuma this week could head to the Zondo Commission, according to Mo Shaik.

Monday’s revelation that Jacob Zuma had apparently accepted a bribe from a Czech gangster seeking asylum in South Africa wasn’t as much explosive as it was absolutely nuclear. Of course, Radovan Krejcir has merely made an allegation – but he says that the proof is out there.

Radovan Krejcir: Fact-file
Seeking protection in Mzansi after a string of crimes committed back in his home country, Krejcir claims that he had drove to Nkandla on one fateful evening to meet with both Jacob and Duduzane Zuma. City Press are in possession of the crime boss’ affidavit, which states he offered the family R5 million for a “no-questions-asked” agreement back in 2011.

Allegedly, Msholozi agreed to the figure, and received R2.5 million in cash immediately. However, things went belly-up when Krejcir was arrested on kidnapping and attempted murder charges in SA, and the Zumas are said to have backed away from the deal.

The Czech criminal even had the bollocks to ask for his money back, and went on to claim that he had recorded the whole seedy encounter – a fact that Hawks officials have recently confirmed.

Could the Zuma, Radovan Krejcir bribe be investigated by the state capture inquiry?
The news had a seismic impact on the country at the start of this week, and the tremors look set to be felt at some point in the future too. Karima Brown – who hosts her own show on Radio 702 – asked whether or not this evidence could be used at the state capture inquiry, set to resume on Wednesday.

Mo Shaik is the former head of the South African Secret Service. He told Brown that the case could be discussed at the Zondo Commission, but they would be bound by the Official Secrets Act, in regards to what information they could share. However, Shaik was confident that it would yield positive results:

“If I’m called before the Commission of Inquiry into State Capture, I would consider it my duty, as the citizen of the country, to disclose whatever I have to. I have full confidence in the commission that they could create the right environment for us to share our information.”

“It is the public’s right to know which must prevail. I support declassifying state information in this case. Yes criminals can be desperate, and the facts need to be checked, but the prosecuting authorities must investigate these claims.” Mo Shaik

“Czech tape”
The tape Radovan Krejcir speaks of is allegedly still in possession of Crime Intelligence bosses. It isn’t clear why action has not been taken against JZ and his son, but with Radovan Krejcir making all the noise this week, the pressure is likely to be ratcheted up on the Zuma family.