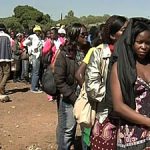 Hundreds of refugees from African countries living in South-Africa say they feel extremely unsafe in the country, especially after being constantly harassed and sabotaged by local residents.

The strangers are currently housed in the “Central Methodist Church of Cape Town and are now looking for ways to get out of the country to a safer place like Canada.

The people previously lived in the United Nations High Commissioner for Refugees, but were later taken there when they were attacked by locals.

South Africa once again became the mousetrap of the world when reports of xenophobic attacks on refugees were released.

The refugees demand that the ANC regime should take them to a safer country at state expense, but there is disagreement about where to go.

Many people ask that they be transferred to Canada where there are no such unsafe conditions.

END_OF_DOCUMENT_TOKEN_TO_BE_REPLACED

According to Mr. Louis Meintjies, the president of TAU SA, is unclear about the exact motives of groups such as the BLF and EFF, but it is very clear that they proclaim racial hatred against white people and even go so far as to say that violence against white people is justifiable.

The leaders of the BLF and EFF, Andile Mngxitama and Julius Malema, and the Secretary-General of the ANC, Ace Magashule, are the frontrunners with their statements in which they encourage supporters to attack white South Africans rather than black foreigners.

Mngxitama threatens that one day “they” will turn against the whites and blame the white minority for “their” poverty. He says that looting and rioting are just the dress rehearsal for a civil war against whites, while Malema encourages his “African brothers and sisters” to focus their anger on the “owners of wealth – white, monopolistic capital”. Magashule denies t
END_OF_DOCUMENT_TOKEN_TO_BE_REPLACED