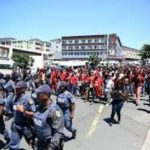 Rebellious students from Durban University of Technology wreaks havoc at the Steve Biko campus during a violent demonstration. They insist that the current security company be replaced. Lectures are currently suspended and nearly 34,000 students are unable to attend lectures. During the riot, 9 students were arrested after gasoline was thrown over a security guard and he was set on fire.

During the riot, two waiting rooms and the interview room were destroyed, and the 27-year-old security officer sustained serious injuries. The latter was rescued after a close escape when his colleagues saw the attack and he was rushed to hospital. Nine students between 20 and 30 years were arrested. The provincial commissioner of police strongly condemned the incident, saying that the involved students is charged with attempted murder, malicious damage to property and public violence.