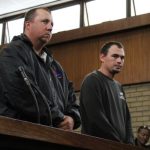 The appeal of the so-called coffin due was successful. Theo Jackson and Willem Oosthuizen’s sentence was reduced to five years, of which they have already served two years.

The two men were also sued for R400 000 by Victor Mlotsha after they forced him into a coffin.

Jackson was sentenced to 14 years and Oosthuizen to 11 years.

The two men who were shot after allegedly forcing another man into a coffin and, among other things, threatened to put a snake in the coffin with him.

A video of the incident circulated on social media, but it is not clear when the incident occurred. The video shows a man crying as he is forced into a coffin by two other men. One can hear in the background how a man’s voice says: “Come on, we want to throw the gasoline, man. Get in! ”

The man in the coffin identified as Victor Rethabile Mlotshwa and, according to notorious, the incident occurred on a farm near the Komati power station.</p
END_OF_DOCUMENT_TOKEN_TO_BE_REPLACED