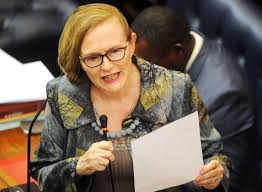 Helen Zille says she will start with a tax boycott action if those who are guilty of corruption as found by the Zondo Commission are not going to be prosecuted.

Zille says she will launch a “tax revolution”, but meanwhile, the DA’s leaders have distanced themselves from  Zille’s statement.

She also believes the same action is needed against all politicians and councilors guilty of bribery and fraud.

An ANC spokesman apparently later said Helen Zille was very close to treason when she made such talks.

Photo – Helen Zille
Read the original article in Afrikaans on Die Vryburger
This report does not necessarily reflects the opinion of SA-news.