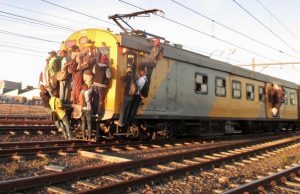 The new trains launched by Ramaphosa must now be guarded on their routes by the SA Defense Force, according to Untu foreman Sonja Carstens.

She called for Ramaphosa to declare the condition at Prasa an “emergency” as criminals and protesters threaten the safety of trains and passengers.

The launch of the one new train is seen as an ANC election gimmick, and its own supporters believe it is just like the fuss made by the Nissan plant being expanded.