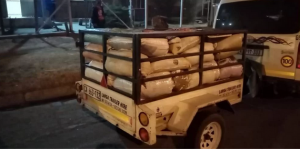 Eastern Cape police stopped a minibus taxi  Sunday evening on the R56 between Molteno and Dordrecht in the Eastern Cape, carrying 57 large bags of marijuana on an open trailer. The 32-year-old driver was arrested.

It is believed that the marijuana was collected in Lusikisiki and destined for the Western Cape.

According to Capt. Police spokeswoman Ursula Roelofse identified the marijuana as “skunk”, a type of marijuana that is apparently very valuable, the 512kg of marijuana seized has a street value of about R12.8m. Roelofse says the breakthrough will ” send a clear message that local authorities will not allow small towns to be used as transport routes by drug smugglers.

The raid was carried out in conjunction with Aliwal North and Queenstown Police’s crime intelligence unit, as well as the police K9 unit.