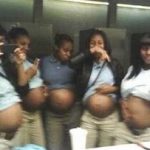 In the 14 months between January 2018 and February 2019, the agency said, 1,287 births were recorded to mothers between the ages of 10 and 14, based on data drawn from the department of home affairs’ National Population Register (NPR).

That does not include unregistered births, nor those that have not been properly recorded. A further 4,872 births were to mothers either younger than 10 or older than 54 – or where the mother’s age had not been recorded and might have been between 10 and 14.
The 2018 recorded births for these very young mothers was down slightly, by 1.2%, compared to the previous year.

But the large number of young mothers did not stop the trend of an increase in the average age of mothers in South Africa.

The median recorded age for mothers in 2018 was 27.9 years, Stats
END_OF_DOCUMENT_TOKEN_TO_BE_REPLACED