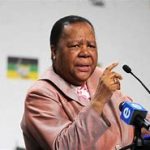 International relations minister Naledi Pandor met ambassadors and high commissioners from Africa on Monday to ease tensions after a diplomatic fallout triggered by attacks on foreign nationals that have rocked the country.

Pandor told the diplomats, among other explanations, that the legacy of apartheid which caused economic inequalities in the country was to blame for locals losing their cool with their African brothers and sisters in a scramble for crumbs.

This phenomenon was among a “toxic mix of socio-economic challenges” and should not be overlooked if long-term solutions were to be found to the current crisis, she said.

It was the same situation of poverty, lack of skills and economic inequalities in other African countries that continued to push migrants to the south in a quest for economic opportunities, said the minister.

As this southward migration increased, some migrants were cashing in with criminal intentions.</
END_OF_DOCUMENT_TOKEN_TO_BE_REPLACED