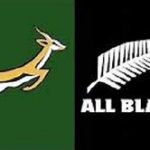 A lot is at stake for the Springboks and All Blacks in Saturday’s World Cup opening match in Jokohama, because a team could never hold the Webb Ellis Trophy if they lost a match in the group rounds.

This is where the foundation is laid, where a team builds momentum and psychologically takes an advantage over its opponents.

The winning team believes they can win the tournament (think of the 1995 Boks who beat the Wallabies 25-18 and have the 2007 team that overcame England 36-0 and went on to clinch the tournament).

Records are sure to be broken, but the winning team’s path to the play-offs on their way to a potential final is also more easily spotted with a quarter-final game against Scotland awaiting, while the team that is likely to lose to Ireland in the quarterback will play.