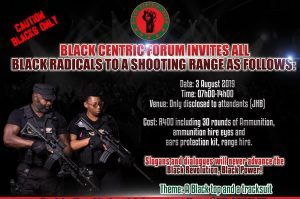 The ANC regimes intention to expropriate land from white people without compensation, does not seem to be going far enough nor fast enough for some. It seems blacks in South Africa are taking their cue from the racist government and stepping up their anti-white racism and militancy in a country which not only tolerates anti white racism, but in many cases openly encourages it! One group, The Black Centric Forum (BCF) is hosting a Shooting Range Session soon whilst The African National Congress Youth League (ANCYL) said it was preparing for a weekend camp where members would take part in gun handling, military training and guerilla tactics, among other activities.

In a pamphlet advertising the Shooting Range meeting, the BCF has invited BLACKS ONLY to join the Training Session, in the “quest to prepare blacks for the grassroots revolution in the near future.  Slogans won’t gain us our land back, so is political propaganda“. Clearly
END_OF_DOCUMENT_TOKEN_TO_BE_REPLACED 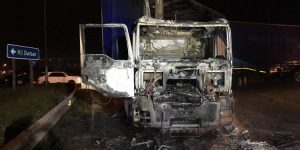 The newly appointed Minister of Transport, Fikile Mbalula, says that unscrupulous transport operators and illegal foreign national truck drivers are to blame for the recent spate of violence.

For local truck drivers, 2019 has proven to be the deadliest and most dangerous period on the roads in recent history. In the last 18 weeks alone, over 200 truck drivers have been subject to violent attacks – some resulting in fatalities – while more than 2000 vehicles have been damaged by illegal blockades, stoning and arson.

Truck attacks wreak havoc on the roads
The nationwide situation has rapidly deteriorated into unmitigated chaos on South African highways, with drivers fearing for their lives every time they get behind the wheel. In an attempt to quell the rampant destruction, government has sanctioned the formation of an inter-ministerial task team, comprising of Transport and Police – the latter, led by Minister Bheki Cele.