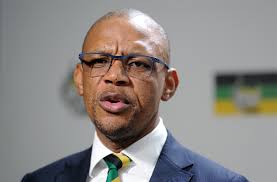 It has not been a great week for the ANC. It has been an even worse week for the party’s national spokesperson, Pule Mabe, who stands accused by his former personal assistant of sexual harassment.

The 26-year-old wrote a 14-page letter of complaint to the deputy secretary-general, Jessie Duarte, telling of the horrors of working for Mabe.

Pule Mabe sexual harassment scandal
In the grievance letter, the PA, an avid supporter of the ANC Youth League, recalled a number of occasions where she found herself cornered by Mabe, who was allegedly doing everything in his power to initiate a sexual relationship with her.

After refusing his advances on a consistent basis, the PA alleged that Mabe started abusing her emotionally and even went as far as allegedly cutting her salary.

Mabe has since taken leave from his duties until the internal processes into the complaint have concluded.

DA calls on the ANC to su
END_OF_DOCUMENT_TOKEN_TO_BE_REPLACED