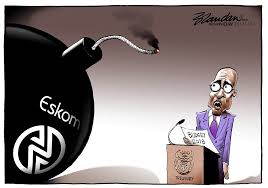 The ANC government does not have a plan to solve Eskom’s problems.

Public Enterprises Minister Pravin Gordhan acknowledged that the ANC government did not have the political will to rectify the broken power entity caused by decades of mismanagement and corruption.

Natasha Mazzone, DA MP, made these accusations that Gordhan’s only plan is to keep the lights on up until election. According to Mazzone, temporary measures will be taken to delay the inevitable and the truth behind the crisis will be hidden during the election period.

Allegations that Eskom was forced to pay salaries for March using a combination of its capital budget and a Chinese loan are also doing round. The funds were earmarked for the maintenance and upkeep of the power grid. Meanwhile, Eskom has bought diesel at twice the market price just to maintain the network until after the election on May 8, 2019.

If the DA’s claim is true, it will undoubtedly me
END_OF_DOCUMENT_TOKEN_TO_BE_REPLACED