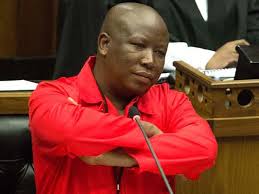 A black man has called out Julius Malema, stating that he doesn’t have the moral qualification and administrative acumen to be the president of South Africa.

This is as the heat is building up for the may 2019 election keeps going up..there have been mixed feelings from lots of South Africans on who or which party to vote for.

All the political parties are asking the electorates to vote for them with various promises of doing better than the ANC.

Malema who took to his Twitter handle earlier yesterday to comment on an issue concerning the alleged plot to remove the EFF from the ballot paper said that “no one can do that.”

“Let me tell you now; no one will remove the @EFFSouthAfrica from the ballot paper, stop entertaining hallucinations. If your handler Pravin couldn’t think about it, who are you #KarimaBrown. Sies” He tweeted

Barely a few hours after the tweets, lots of comments started pouring in with most of them
END_OF_DOCUMENT_TOKEN_TO_BE_REPLACED