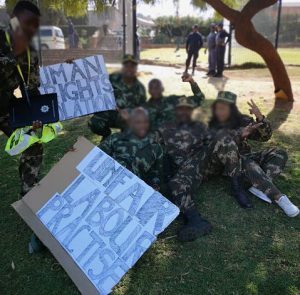 Members of a ‘death squad’, recruited by former Minister of Police Nathi Nhleko and trained between March and May 2016 by the elite Chinese People’s Armed Forces Academy, are living in a twilight zone, seemingly left to fend for themselves and in fear for their lives.

When an approach to the Office of the Inspector-General for Intelligence as well as the Public Protector yielded no result, these “top secret agents of the state” on 30 May 2019 delivered a memorandum to the Presidency.

Among the demands were that members are “given all benefits that everyone has” including medical aid and housing, danger and clothing allowances.

They have also requested to be “placed correctly as police officials” and “to be given proper ranks within the SAPS system”. Nhleko’s recruits also begged President Cyril Ramaphosa for protection “since our lives are in danger, we might be assassinated at any time”.

While the Presidency h
END_OF_DOCUMENT_TOKEN_TO_BE_REPLACED