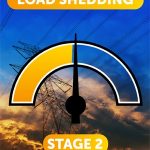 Meanwhile, complaints are pouring in that Eskom’s “WhatsAPP” schedule differs from its schedul
END_OF_DOCUMENT_TOKEN_TO_BE_REPLACED 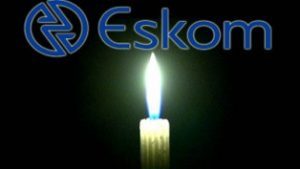 Suburbs across Johannesburg, South Africa’s economic hub, were hit by widespread power outages on Friday that electricity providers were unable to explain.

“Technicians are on site to determine the cause of the outage,” Khulu Phasiwe, a spokesman for state-owned power utility Eskom Holdings SOC Ltd., said via Twitter. There’s no estimated time for the restoration of electricity at this stage, he said.

Eskom said earlier on Friday that there was a risk of blackouts because the power system “remained tight and vulnerable” and the power could be cut at short notice if there was a shift in plant performance. 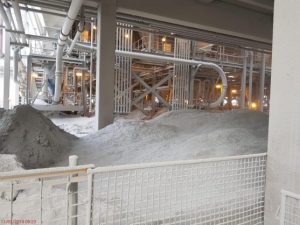 The five power generation units at Eskom’s troubled new Medupi power station that have been operational are drowning in ash after Clyde Bergemann Africa (CBZ), which was contracted to supply and construct the dust handling units, withdrew its staff from the power station.

CBZ managing director Jeremy Kirsch confirmed to Moneyweb on Monday that the business was placed in business rescue last week, days after he spoke out about what he described as Eskom’s failure to operate the plant at the completed units properly.

EE Publishers managing editor Chris Yelland however reported last week that these workers are “on tenterhooks” and could down tools at any time.

As far as Moneyweb could establish at least four of the five operational units at Medupi were working on Monday, alth
END_OF_DOCUMENT_TOKEN_TO_BE_REPLACED 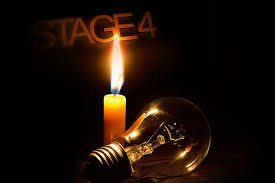 The South African Communist Party says Eskom’s management is rolling out massive blackouts in an attempt to blackmail South Africans to accept privatisation of the power utility.

Eskom resumed with loadshedding for the first time this year on Sunday.

Power cuts continued yesterday and Tuesday after a failure of generating units.

“The management of Eskom, in the manner that they are rolling out these blackouts, is trying to blackmail us so we must accept whatever should befall Eskom. We should not be blackmailed into that. That’s why we believe that these blackouts can be avoided,” SACP first deputy general secretary Solly Mapaila stated.

Mapaila said one of reasons given by Eskom for load shedding was low stocks of diesel.

“Why can’t they procure enough diesel on time? It is all of those things that I think are just unacceptable. The reasons why there were blackouts and so forth were issues of leadership incompetence. W
END_OF_DOCUMENT_TOKEN_TO_BE_REPLACED 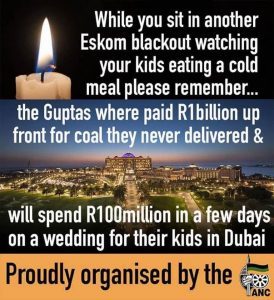 The Emirates Palace hotel in Abu Dhabi where the Gupta family are reportedly hosting a lavish double wedding in February 2019.

The Guptas are reported to be hosting a lavish double wedding at a palatial hotel in Abu Dhabi.

The AmaBhungane Centre for Investigative Journalism published a nine-page wedding invitation on Friday and said the bash, an event lasting five days between February 19 and 23, could end up costing as much as R100m.

“This is the third publicly lavish wedding the family has funded,” said AmaBhungane.

The logos of Gupta companies in South Africa, including the Koornfontein mine where miners have gone unpaid, are featured in the wedding invitation.

The publication said a request for comment direct
END_OF_DOCUMENT_TOKEN_TO_BE_REPLACED 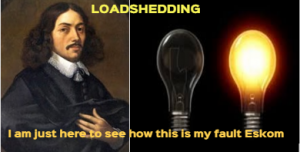 The Cape Chamber of Commerce and Industry is shocked by the sudden dramatic increase in load shedding.

“How is it possible for six units to go down at the same time?” asked Ms Janine Myburgh, President of the Chamber. “It is just too much of a co-incidence and we must ask if this is not another case of sabotage?”

Sabotage was blamed for a previous bout of load shedding, but the form it took was never explained to the public, except for workers who prevented coal deliveries from taking place.

“Stage Four load shedding is very serious indeed and it will affect commerce and industry. This will also affect the jobs of other workers, especially in heavy industry and it is time that workers whose jobs are at
END_OF_DOCUMENT_TOKEN_TO_BE_REPLACED

Despite, (or thanks to Billions in foreign investment in Eskom), 7.2 Million tons of SA’s best coal is destined for China from Richards Bay Harbor while South Africans suffer under rolling blackouts. 36 Chinese ships are waiting for coal to be loaded in Richards Bay Harbour. Each ship takes about 36 hours to be loaded with 200,000 tons of coal per ship average. The coal is Grade A anthracite.