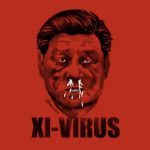 While Ramaphosa is panicking trying to clean up China’s mess in SA, US President Donald Trump recently lashed out at China over the “Chinese Virus” as he called it. At a recent press conference where he said that China did not inform the US about the crisis, and said that he is a little upset with the Chinese authorities, Trump added that had everyone been informed a few months back, when China knew, a lot of lives could have been saved. Even the W.H.O. warned a while back that the next big epidemic could come from wet markets in China, but China willfully ignored it…

Yet it appears China is still busy with subterfuge and blatant lies and cover-ups. China reported a twenty-one million drop in cellphone users for the past three months, which could indicate that the #CCPvirus casualties are far more than they admitted. One would imagine in a lockdown situation, there would be more cellphone accounts, as people try keep in touch with each other?

Also, as we reported, China was also activity engaged in political correct propaganda in Italy, encouraging and blackmailing Italians through guilt to “hug a Chinese“, with devastating consequences, as we can all see. Italy now has far more deaths than China even! Why would China be pushing such a propaganda campaign in Italy, if they have nothing to hide? Even in South Africa the ANC regime and Naspers (Media24), who have massive business interests in China, are hard at work trying to save China’s image, as we reported here, doing their best to create the impression the Chinese Virus came from Europe and that the white man is to blame again, after all Chinese people are a privilege class, along with blacks in South Africa.

The fact that China is still up to dirty tricks is key in two US firms deciding to launch class action suits against China now already, even though the pandemic is still raging and spreading at an exponential rate. The Berman Law Group is one that has sued China – blaming it for covering up the Coronavirus outbreak in Wuhan. Can China be held legally accountable and if so, how can China be made to pay for its negligence? A question which will have the Communist ANC, SACP and Naspers squirming in their seats!

Jeremy Waters is the chief strategist at the Berman Law Group who answered claims this suit is just a distraction and that there is no proof yet to back these claims. He said the legal strategy behind the lawsuit, that the lawyers in the firm are utilizing, is a class-action based against a foreign nation, which allows you to sue under certain exceptions for their bad acts, that have harmed citizens of the United States, and abroad.

Jeremy said they decided the time to act was now, even though we’re still in the midst of the coronavirus crisis, so they filed a lawsuit at this point in time to put China on notice of their bad acts, “if we don’t put them on notice now, maybe China will continue to do bad acts as it goes forward. So in the United States we have the right to file the lawsuit, to put this country on notice, to let China know that we know what they’ve done, and that we don’t appreciate what they’ve done and most importantly, that they’re going to have to pay for what they’ve done, and I want to be very specific, we are not talking about the people of China, we do not hold individuals and China responsible as they they are in the same position we are. This information was hidden from them too. We are talking about the Chinese government and the people behind all this now.”

He said that even though China enjoys sovereign immunity, it can be held liable for a pandemic in an American court because there are exceptions to the foreign Sovereign Immunities Act involving commercial activity involving terrorism, and involving other types of activities that have harmed citizens in the United States. “So these acts that the Chinese government has conducted, that fall into those exceptions in our opinion and our lawyers believe that they will be able to pursue it under those exceptions.”

Mr Waters said there are trillions of dollars in damages and pointed out that China is a world superpower. “They’re one of the wealthiest nations in the world and one of the more powerful nations in the world, and they used that power to conceal this disease, this virus, in order to protect their economic interests, and when they did that, they harmed the citizens of USA and the citizens other countries around the world. By doing that in the United States, they will be held accountable and if we prevail, will be held to pay for the damages that they’ve caused, not only to the individuals who have unfortunately been diagnosed with this terrible virus, some of whom have died, some of whom are in ICU, but also the businesses, small and large in the United States, the individuals who have been harmed, the people who work in restaurants, who are waiters and waitresses and are out of jobs, valet people, people that work maintenance. There are hundreds of millions of people at home in the United States right now, and the economy is taking a huge hit as a result of this, and China will be held accountable if we win in this lawsuit, to have to pay actual damages to these individuals and these companies.”

Whatever the decision is in the end, lawyers in USA have the right to serve China through the Hague Convention process which would allow them to serve China with a complaint and require them to come to court in the states. If China refuses to do so, that would say a lot about them avoiding responsibility, so it is expected that they will respond to the complaint and accept service.

Waters went on to say that if China refuses to do so, there will be other steps that they can ask the court and other means to put pressure on China to participate in this lawsuit, so that they are held accountable. “They need to be held accountable for what they’ve done both here and abroad. They have trillions and trillions and trillions of dollars and control a large part of the world economy, this is not something they should take lightly. This is a very serious situation they’ve caused for the United States.”

This chart indicates how China mitigated their losses by spreading of the virus to the rest of the world, so if it was a response to losing the trade war…, a bio weapon? Will we ever know? 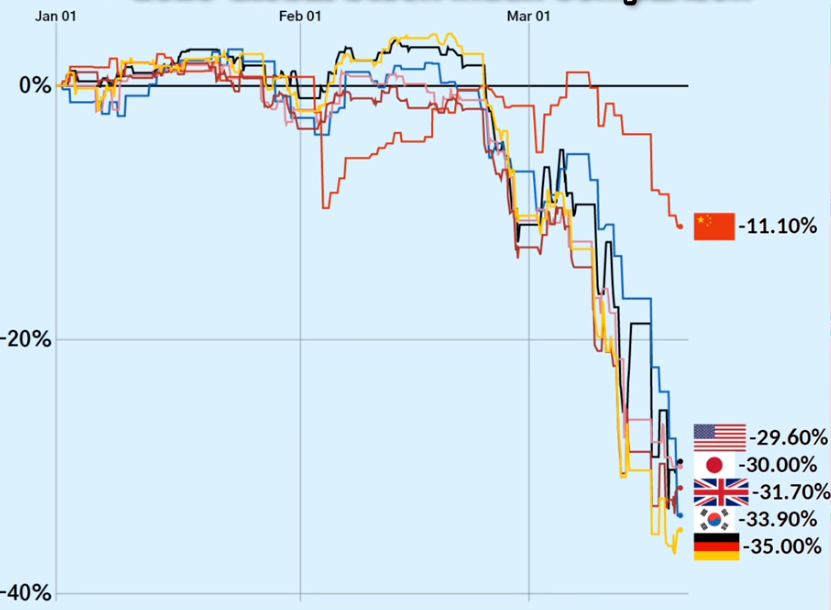 It is up to other countries if they also would want to pursue lawsuits, and it depends on what different country’s laws allow, but this is a worldwide pandemic that has never happened before, but it happened as a result of China concealing what was going on there, so there may be a call for the laws internationally to be changed, to allow for the pursuit of the damages against China. Something ANC will no doubt oppose.

Because this is so devastating to people around the world, finding the laws is the second step, first you need global consensus building around the demand for such legal action against China. China has handled and controlled too much of our economy for too long and it is time for that to change, around the world too, time to tell China, no more that this cannot happen anymore, we cannot be affected by their bad acts just because they’re worried about their economy.

The two lawsuits against China, one in Florida and one in Texas and hopefully there will be a global consensus to make China pay for their criminal negligence when they unleashed a pandemic by trying to hide the virus. The anger against the Chinese Communist Party is growing, in China and abroad.

A copy of the lawsuit from the Florida law firm blames China for failing to report the disease. It says China acted slowly and “put their head in the sand“. The lawsuit blames China for covering up the Wuhan outbreak. This legal challenge will expose every aspect of how the first case emerged towards the end of 2019, how China did not report the outbreak till January, how test samples were destroyed, how whistleblowers were muzzled, etc. The Florida lawsuit touches each of these points and it demands damages from Beijing. 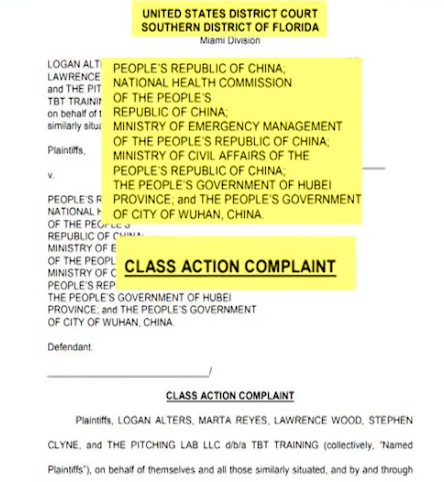 It highlights China’s criminal negligence and here are some of the telling statements from the lawsuit:

“China’s new COVID-19 was spread human-to-human by the third of January, but they told the public otherwise, in other words the government lied.”

“President Xi Jingping originally stated that he directed officials to contain the virus on the 7th of January, but it has emerged that he did not do that, he actually waited to the 22nd to do direct containment, meaning the Chinese government was awfully late in acting.”

“Leaders in Wuhan held a public dinner for more than 40,000 families on the 18th of January, despite knowing the ease of human-to-human spread of the virus!”

If this isn’t criminal negligence, then what is?”

But will a legal challenge work? Can China be held accountable in international courts? Legal professionals have different opinions on this. Fox News spoke to Natasha Darsh Andreevna, an Israeli lawyer who specializes in suing terrorist groups and governments for human rights abuses. She says that while China enjoys sovereign immunity, it should be held accountable for trying to conceal the Wuhan virus from the world. The lawsuit may or may not work, but it does send a message.

These two cases will be landmark ones and could set a precedent for governments being held accountable for criminal negligence that cost thousands of lives the world over, because as we all know, current structures like the ICC and UN are laughable and exist only to exert their own globalist power trying to undermine national governments, not support them!

There is a lot to find out here and certainly many books will be written about in the years to come, for those of us that survive. The relationship between the Chinese Communist Party, ANC, Naspers, SACP, etc. needs to be exposed, but mainstream media will never do that.

Read also: China invests millions in SA – South Africa is not for sale. This country cannot be sold out to anyone!