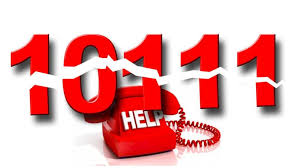 A 23-year-old Cape Town woman, living right across the Table View police station, phoned the police’s 10111 emergency number at 06:17 on Wednesday morning, and pleaded for help as she suspected a burglar was in her house. Until her bitter shock, the operator dropped the phone call after 25 seconds, without giving any assistance.

According to a report from Netwerk24, the petrified woman once again dialled the 10111 number and told the operator on the other side that she had heard someone in her home and that she suspected it was a burglar and begged for help. The police officer who answered the phone first wanted her contact details, requested confirmation that someone was in the woman’s house, and then asked her to spell her address before sending the police. The woman says it took the police almost 20 minutes to get to her, which is across the police station. She later heard after the 10111 emergency service contacted the police station it took members of the police station a mere three minutes to arrive. She says that she have no learned now after her ordeal, that one should rather contact your nearest police station when you need help in an emergency situation.

Capt. F.C. Police spokesperson van Wyk says the burglar had access to the house from the second floor. He probably came in to one of the windows and went out the same window again. Furthermore, he said police could not comment before the woman filed a complaint against the police and the case was investigated by the Independent Police Investigation Directorate (Opod).

“We will only be able to comment once the investigation has been completed. Both parties should be given the opportunity to put their side of the case, “he said about the allegation that the police killed the phone in the woman’s ear because they couldn’t spell her name.