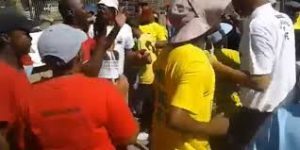 The Green Party of South Africa (GPSA) said that political and Government bigwigs should stay away from the premises of the Laerskool Schweizer-Reneke.

According to Ms. Anisha Garib, GPSA spokesperson and member of the Steering Team, young pupils, staff and parents are traumatised by the sudden flurry of officials and political operators descending on the school.

According to Garib, high ranking officials from political parties, the Department of Education the Human Rights Commission appear to act like “political vultures”, feeding on the alarming level of racial divisions that currently prevail in South Africa. This draws our attention away from the real problems facing the country.

“Go have your meetings somewhere else – not at the school where children are present and witnessing some childish behaviour by adults”, Garib said.

Garib said that the spread of fake news is an ever-growing epidemic that is currently feeding racial tension In south Africa. While social media is a great tool for sharing news and highlighting injustices, when used irresponsibly can wreak havoc.

The GPSA said that there is no doubt that an investigation is needed, but facts should be confirmed before people make harsh judgements and label an incident as racist. This lead to a group of young people having the memory of their first day at school tarnished by the frightening experience of having demonstrators descend upon their school. Demonstrators acting on nothing more than a single photograph, with no context.

Any investigation by Government should not be disruptive to the learning process, and should not cause further trauma and confusion to this group of children.

The GPSA said that appropriate actions should only be taken, if necessary, after conclusion of the investigation.

In the meantime, political vultures with the intention to exploit this case for political gain, should stay away from innocent children.

By: The Green Party of South Africa
This report does not necessarily reflects the opinion of SA-news.