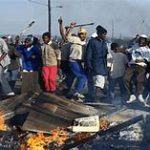 The right to protest is part of human rights. If you are opposed to something, you protest against it.

In most organized and civilized countries, people take to the streets carrying posters and banners, address the media, and then present a document outlining their grievances and what they would like to be done about it.

And then they go home.

Not in South Africa.

You don’t need to have a valid grievance. You don’t need to explain the reasons for your protest clearly, you don’t need to suggest a sensible sollution and you don’t, definitely never ever, need to behave sensibly. You break whatever glass you can find, you set fire to anything that can burn and if possible, make sure you injure or kill a bystander for special effect.

The violent protests around Dunoon on the Cape Flats last week was another prime example of this barbaric conduct.

And dear friends abroad, do you know what the protest was about?

School children were protesting because minibus taxi’s received fines from the traffic department for reckless driving!