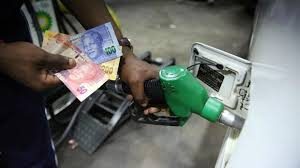 The latest data from the Central Energy Fund (CEF) points to a flat month in August for petrol prices – though there may be good news for diesel drivers.

Diesel, however, is currently showing an over recovery of 20 cents per litre, which means at least some motorists may be paying less next month.

The flat rate in petrol prices is due a reversal in trends for both international petroleum prices and the rand/dollar exchange rate.

For the first two weeks in July, the rand has strengthened against the dollar, contributing to a 25-27 cents per litre drop in both the petrol and diesel prices.

This has been undercut by the movement in the international product prices – at least for petrol – which are contributing to a 30 to 33 cents per litre increase.

The rand has experienced new strength in the last week or so, due to an improvement in local sentiment on the back of government plans to bail out Eskom, as well as international movements which have renewed investor appetite for riskier assets.

Locally, National Treasury announced a new ‘rescue plan’ for embattled power utility Eskom, which would see it access funds set aside for its restructuring and turnaround plan a lot sooner.

This put investors at ease that the power utility wouldn’t be left in the lurch by the government, and that it would have the necessary support to improve its financial situation.

Other positives feeding local sentiment was the reappointment of Reserve Bank governor Lesetja Kganyago for another five-year term, which reinforced government’s stance on continuity at the central bank, staving off talk of nationalisation and mandate change.

There is also anticipation that the Reserve Bank’s Monetary Policy Committee will be announcing a rate cut this coming Thursday (18 July).

Further abroad, US data has been a mix of contradictions, but in the latest reporting pointed to a likely rate cut by the Fed at the end of the month. US economic data pointed to a stable market, which restored investor appetite for riskier assets in emerging markets.

Prices have been dropping due to a general global economic slowdown putting pressure on demand – exacerbated by volatile US-Iran relations, and an extended production cut in OPEC regions.

However, a combination of geopolitical tension in the Persian Gulf, outages in Venezuela and Iran, the aforementioned rate cut by the US Fed and the brewing storm in the Gulf of Mexico has led to strong price increases in oil over the last week.

According to Standard Chartered, the rally may run out in the medium term, but it believes it could top out with Brent Crude rising above $70 a barrel once again.

Recent declines in the petrol price in South Africa have been driven by the falling oil prices (to around $60 a barrel) – so the rally and any further increases will undoubtedly have the opposite effect.

-Business Tech / 2019-07-14
This report does not necessarily reflect the opinion of SA news.