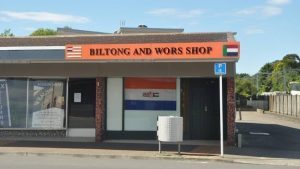 On a busy street in Tawa, New Zealand, the Biltong and Wors Shop’s front window is dominated by an old South African flag.

More than three months after outrage erupted over the “apartheid symbol”, the owner has still not removed the large flag.

Angry residents have now started an online petition to “help persuade the owners to do the right thing”.

The petition was started on Monday following Friday’s terror attack which claimed 50 lives in two mosques in Christchurch.

“In light of recent events, it is even more important to call out and challenge racism and white supremacy,” New Zealand lawyer Richard Stephen said.

Stephen launched the petition because the “flag has become a symbol of the brutal apartheid regime, which oppressed millions”.

“It also became a symbol for white supremacy. For example, it was displayed on the jacket worn by American mass murderer and white supremacist Dylann Roof,” he said.

In the petition, Stephen said the flag was an insult to the victims of apartheid and the people of Tawa and New Zealand.

By Wednesday morning, more than 800 people had signed the petition.

Stephen told TimesLIVE that he first noticed the old flag in the store’s front window in December.

“I only moved into the neighbourhood a year ago and I don’t often go down that street. It sounds like it’s been around a while, maybe years, and is on Google street view,” he said.

In 2016 the shop posted a photograph of the new South African flag in its front window on Facebook.

Stephen didn’t know when it had replaced the new flag with the old one, adding that he wasn’t able to chat to the owner because he worked in the city and the shop was closed at weekends.

Stephen said he had passed the store on his way home, when the store was closed, on Wednesday to confirm that the old flag was still up.

Stephen has no strong or direct links to South Africa, but said the cause was important to him.

Last year, when Tawa residents complained about the flag, the owner reportedly told New Zealand media that he was aware of the outrage, but refused to comment further.

According to the store’s Facebook page, inquiries are to directed to L Vorster. Efforts to contact the shop telephonically and via email were unsuccessful.