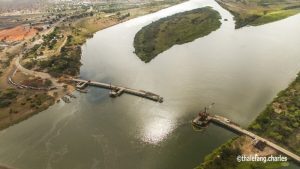 At the time, Manager for Regional Integration Operations at the Bank Mamady Souare said: “It is obvious that once completed, the Kazungula Bridge Project will actually bridge the regional divide. The project will transform the dynamics of transportation in surrounding communities, counties and cities, boosting road travel and the ease of doing business within the Southern African Development Community, the East African Community and the Common Market for Eastern and Southern Africa,”

Plans for the bridge began back in 2011 when feasibility studies and funding started for the $260m project. Construction began in 2014 when Zambian and Botswanan government agreed to be part of the of the project. Once completed, the bridge will replace the existing Kazungula ferry service.

Based on the ferry’s Tripadvisor data, many travellers will be happy to see it gone, as several travellers commended the ‘Botswana side’ but said the Zambian side was “chaotic.”

Travelling between the water-rich but land-locked Zambia and Botswana will get easier, smoother and faster, when the new road and rail bridge, currently under construction across the waters of the Zambezi, is commissioned for public use. https://bit.ly/2Qv8cGQ

Kazungula Bridge to link, open up markets in eight African countries – startupAFRICA
Scenes of traders, travelers, fishermen and women crossing the Zambezi river on floating planks, ferries, rickshaw boats, and canoes will soon come to an end. In just 24 months, travelling between…

Apart from the ease it will provide for travellers and traders, the bridge project created more than 1,400 jobs, including employment opportunities for women. The regional economy will also receive a boost once the bridge is operational. A reporter for Business Times Africa explains:

“As the first wave of vehicles and pedestrians begin to use the new bridge, the regional economy will receive a much-needed boost through increased traffic throughout the North-South Corridor, a key trade route linking the port of Durban in South Africa to Botswana, Zambia, Zimbabwe, Malawi, Mozambique, DR Congo, and up to Dar-es-Salaam in Tanzania.”

By: The South African
This report does not necessarily reflects the opinion of SA-news.