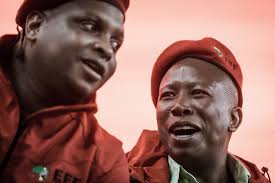 The leader of the EFF, Julius Malema claims that Floyd Shivambu, the deputy leader of the party’s,is in danger based on evidence of an intelligence report hold at the SAPS’s crime intelligence entity. According to the report, Shivambu is being targeted by an already-identified assassin.

Netwerk 24 reports that although the (police) minister has the report in their possession, the matter is still being addressed. Malema argues that there is a price on Floyd’s head and that assassin went to Floyd. According to Malema, the case was reported to the minister, crime intelligence and the matter was investigated. It was confirmed that they knew who the person was.

Malema, who did not share too much information on what was stated in the alleged intelligence report, continued to say “the person owns hotels in Natal, he is an Indian who instructed the deputy president of the EFF to be killed”. Malema believes police minister Bheki Cele is aware of the situation.

Foyd is the second high-profile person, alongside former president. Jacob Zuma, who received allegations of intelligence reports and death threats this week.