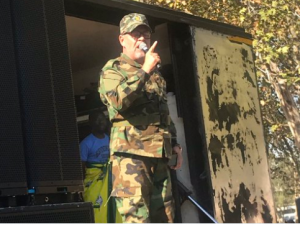 Carl Niehaus, has warned the media that he and the MK Veterans “are coming for journalists” who show them disrespect.

In what has become a routine occurrence outside of Jacob Zuma’s court hearings, the former president and his cronies – Carl Niehaus included – addressed crowds in the streets on Pietermaritzburg on Monday. Msholozi continues to preach and protest his innocence, dismissing the corruption charges laid against him as a witch-hunt.

JZ is adamant that the prosecution of Schabir Shaik was just a “dry-run” to ensure that they could jail the 77-year-old. Zuma’s former business partner was convicted on the same charges back in 2005, and the defence team are fighting tooth and nail to prevent a criminal trial getting the green-light.

Inside the courtroom, the new lawyers representing Jacob Zuma took centre-stage. Outside of it, uBaba and friends proved to be blockbuster entertainment. Watching Zuma’s new inner-circle develop is pretty engrossing itself, with the likes of Andile Mngxitama – the BLF leader – making regular appearances at these rallies.

Carl Niehaus tells journalists “we will come for them”
However, one constant that isn’t changing is Carl Niehaus. The MK Veterans spokesperson is Zuma’s biggest cheerleader, and that proved to be the case on Monday. He took to the stage and hammered those who criticised their protests, and took a particular dislike to the way journalists had been covering the demonstrations:

“These so-called journalists must be under no illusion that we will come for them. How dare you call this uniform we are proud of as soldiers who fought and died for this liberation a Pep store outfit.”

“We are the products of the masses of our people who are the grassroots members of the ANC in our branches. We fear nothing, we will stand strong, we have the protection of our people!”

Carl Niehaus
Niehaus threatened the press again, saying that “disrespect for the struggle” would no longer be tolerated. The former spokesperson to Nelson Mandela has never been shy when it comes to opposing how the media have reported on the MK Veterans – even when it comes down to their dress sense.