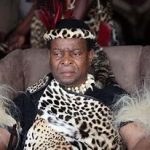 Experts from the South African constitution say it is striking, but unsolicited, that the Zulu king Goodwill seeks to exert influence on matters of the state.

Zwelithini was apparently disgusted because he was not even approached before the Minister of Police would talk to hostel residents’ leaders.

It is clear that Goodwill is attempting a power play, but it is also clear to experts that he has no idea of the Constitution’s provisions.

There is no reason for the minister to get “approval” from the Zulu king before he wants to talk to hostel leaders about the xenophobic cases.

A meeting with hostel leaders from Jeppestown and surrounding areas from where many attacks were made on strangers was planned to take place over the weekend and is the main center where 12 people were killed.

However, Zwelithini’s bossy attitude made him look ridiculous and ignorant, a political expert and Constitution expert later said.