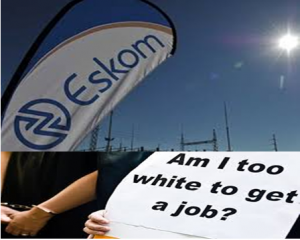 Eskom and the government’s unwavering attitude to applying Affirmative Action (RA) is now costing South Africa. Due to RA, experienced and knowledgeable engineers have left Eskom and now the Minister of Public Enterprises, Mr. Pravin Gordhan, are asking them to help save Eskom.

The Freedom Front Plus has long warned that RA is harmful to Eskom, but also to South Africa. The concern has already emerged from a parliamentary question in 2011 by the leader of the Freedom Front Plus, dr. Pieter Groenewald, to the Minister of Public Enterprises, about the number of engineers, artisans and technicians who left Eskom.

Eskom’s latest affirmative action plan according to which 1308 less qualified white employees are required to be in service by March 2020, has shown that Eskom considers higher bills to be of greater importance to South Africa.

In the debate on the State of the Nation Address, the leader of the FF Plus (Dr Groenewald), told President Cyril Ramaphosa if he wanted to save the economy, he had to get out of the economy and stop expropriation without compensation. In previous debates in the president’s budget, Dr. Groenewald specifically asked for affirmative action to be abolished, as South Africa needs its best talent.

It is also unfair to harm young people born in 1994 because of their skin color due to RA.

The fact that all the other parties in parliament, except the FF Plus, are in favor of RA and want to continue with it, means that they are obsessed with race. South Africa needs merit to build the country and not race cars.

The words of the finance minister, Mr. Tito Mboweni, who regrets South Africa over thirty years because the University of Pretoria only uses English as language of instruction this year, also applies to Eskom. South Africa now, 25 years later, regrets that they have RA – like at Eskom.

Read the original article in Afrikaans by Dr Pieter Groenewald on FF Plus
This report does not necessarily reflects the opinion of SA-news.