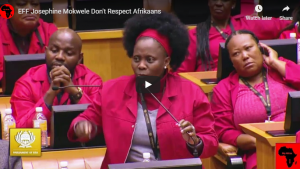 Tempers flared during the arts and culture budget debate on Tuesday, just five days after the EFF caused some thoroughly unsavoury scenes in Parliament by confronting Pravin Gordhan. Thankfully, this latest altercation with the Freedom Front Plus (FF+) remains only a war of words – but civility is still lacking.

EFF label Afrikaans “disturbing”
As FF+ MP Heloise Jordan began speaking, she was interrupted several times by EFF representatives who objected to her use of Afrikaans. The disruption also came just a few days after the red berets’ Josephine Mokwele said that the language was a “disturbing” one, claiming she would “never respect it”

Afrikaans labelled a tool of “white supremacy” by EFF
The hostile tone continued when the parties came face-to-face with each other this week. Ringo Madlingozi, one of the party’s newly-elected members, raised the point that Afrikaans is “the language of the oppressor”. He also went on to bemoan the existence of Die Stem in the national anthem, causing controversy in the chambers:

“We see this white supremacy in the fact that English and Afrikaans remain the only two languages that have been mainstreamed and are used in professional environments. We see this in the buildings and streets named after the colonial murderers and criminals.”

“And we maintain our principle that Die Stem must fall. Asking blacks to sing the anthem of the oppressor is the encouragement of self-hate, and the glorification of a criminal regime. It glorifies a regime and system that is responsible for black genocide.”

Ringo Madlingozi
FF+ respond to language criticism
However, the FF+ have taken pretty serious offence to these claims. Jordan issued a statement after the confrontation on Tuesday, where she raised an impassioned defence of her mother tongue:

“The statement by an EFF member [that Afrikaans is a disturbing language] is an insult to all speakers of the language. The FF+ views South Africa as a tapestry of communities with beautiful languages and cultures that should all be respected, valued and promoted. No language is above another.”

The party had also clashed with Panyaza Lesufi on Tuesday, with representatives in the Gauteng Legislature taking the Education MEC to task on the preservation of indigenous languages. Lesufi claimed that “all languages” must be saved in South Africa, but wouldn’t entertain the FF+’s claims that Afrikaans was being erased.

-The South-African / 2019-07-17
This report does not necessarily reflect the opinion of SA news.