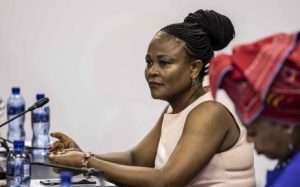 “If you are a minister, you should be respecting the Constitution and the rule of law.”

With fifty top heads of state outlined including the President, the Finance Minister and Police Minister how should the nation feel about our leaders….trusting and confident?

Mkhwebane said despite budget constraints, she is forced to take various matters to court to force state organs into action.

“We’re here to support and strengthen our constitutional democracy. We are not here to be antagonistic.”

She has slammed Cele for failing to protect whistle-blowers in Umzimkhulu in KwaZulu-Natal. The public protector found that in 2018, Cele and the police had failed to protect Thabiso Zulu and Les Stuta, who had blown the whistle on corruption which they claimed had led to the murder of former African National Congress Youth League secretary-general Sindiso Magaqa.

This could have resulted in the assassination of the two men

“This matter is not about a witness protection matter, this one is somebody who sees there’s this corruption happening… I’m a whistle-blower and because people know that it’s me, can I be protected?”

Cele and the Treasury were among 50 government officials and organs of state that were named by Mkhwebane as having failed to implement the Public Protector’s remedial action.

Mkhwebane says since she’s out of options, she has written to parliamentary Speaker Baleke Mbete to report rogue ministers.