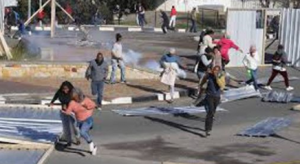 The incident near Uniondale in the Southern Cape where a farmer, according to media reports, shot at protesters who were reportedly participating in a violent protest action and blocking roads serves as proof that these service delivery protests can lead to the loss of life as members of the public may feel that their safety is being threatened.

The police are investigating a charge of attempted murder against the man, but one must ask to what degree his personal safety, the safety of his family and his property were under threat.

Every person in South Africa has the constitutional right to defend their personal safety as well the safety of their family and to prevent any damage to their property. Violent service delivery protests could compel other people to use violence in order to exercise this right of theirs.

The investigation into the matter must be conducted and finalised as soon as possible so as to determine whether the farmer acted in self-defence and if he had to use an appropriate level of violence to protect himself and his family.

It is lamentable that the media specifically referred to the man as a farmer as it serves to label the agricultural community in South Africa as being trigger-happy and as having no regard for life, while the opposite is true and everyone has the right to defend and protect themselves.