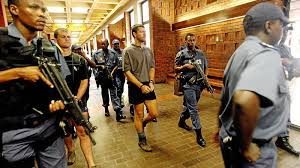 18, 19 and 20 June 2019 will be a watershed case, which will determine whether there is any place left in the South African courts for the constitution and international covenants.  It will show whether revenge on and oppression of the Boer people pertains such a priority in South Africa that it negates all justice.

The Pretorius family, which is connected to the Boeremag case, is to launch an application on 18 June 2019 in the High Court of Pretoria, challenging the lawfulness of their incarceration and ask for permanent release, alternatively temporary release pending their complaint filed at the United Nations’ Committee for Human Rights.  They were arrested in 2002 and sentenced in October 2013 between 30 and 35 years imprisonment for high treason.

On 5 June 2018 the father, Dr. Lets Pretorius, filed a complaint through Prof. Hercules Booysen, an internationally respected expert on international law, at the office of the United Nation’s Human Rights Committee, which was accepted on 2 July 2018.  The two brothers, Drs. Johan and Wilhelm Pretorius filed their complaint on 22 July 2018, which was accepted on 3 December 2018.  Their cases are based on the Optional Protocol to the International Covenant on Civil and Political Rights, to which the Republic of South Africa has committed itself after 1994.  In their complaints to the United Nations they are asking for immediate release as well as compensation for the 17 years of unlawful incarceration.  They state that their trial was unfair due to various human rights violations by the state of South Africa, which are protected by the minimum guarantees of a fair trial.  Due to the fact that their trial was unfair, their incarceration is unlawful.

Their prayer for permanent release is based on three violations of their judicial process, guaranteed by the constitution and international covenant. They are:

Alternatively they are asking for temporary release to mitigate the harm afflicted by the unlawful detention, in order to prevent even further infringement of their rights pending the outcome of their complaint to the United Nation’s Human Rights Committee.  They state that the violations during their trial were such obvious violations of the Republic of South Africa’s international obligation that the Committee cannot come to another finding than to declare their trial unlawful. However, the case at the United Nations can be pending for four years.  It means that they would be unlawfully incarcerated for 21 years with a very good chance to then be discharged.  They refer to several arguments from their international complaint, on grounds of the following violations:

Advocate Zinzile Matabese, acting on behalf of the State, the Minister of Justice, Correctional Services, and the National Director of Public Prosecutions, argued that the application was vexatious and frivolous.

Matebese argued that the High Court did not have the jurisdiction or power to review itself and that these matters should be dealt with in a superior court.

He added that the application should be argued in the SCA and the fact that a complaint has been laid with the Human Rights Committee did not change the court’s jurisdiction.

Judgment has been reserved.