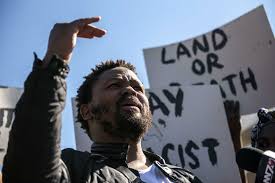 Andile Mngxitama’s Black First Land First has been ordered to issue a written apology to all South Africans within a  month.

The Equality Court has found that the Black First Land First (BLF) political slogan on land is hate speech.

The clerk of the Equality Court was directed to send a copy of the judgment to the director of public prosecutions, “for possible institution of criminal proceedings against the BLF and its leaders,” Buang Jones‏, an attorney at the SA Human Rights Commission, tweeted on Monday.

The BLF regularly used the slogans “kill the boer”, “one settler, one bullet’ and ‘land or death’.

The BLF was also ordered to remove the slogans from its regalia, social media accounts and website within a month.

In addition, the BLF was ordered to issue a written apology to all South Africans within a  month.

This apology must to be published on the website of the SAHRC, said Jones.

BLF deputy president Zanele Lwana said the party would appeal against the verdict. “We believe the Constitution protects us and we do not believe the slogan is” land or death “hate speech. We still believe it is within our rights to say this, ”said Lwana.

Lwana said the party is now focusing on Wednesday’s national election and says the court case was a way of trying to confuse people with either the BLF’s participation in the election or not.

She said the party would study the verdict properly after the election and then appeal to the appropriate court. She said the BLF was prepared to eventually fight the issue into the constitutional court.

According to her, after the election, the BLF is putting pressure on the ANC and EFF to implement the policy of expropriation without compensation. “Our position is that the settlers came to Africa and South Africa and made people slaves to take their land. We will fight to take our land back. ”

The Electoral Court last week found that the Independent Electoral Commission (IEC) had failed by not announcing the BLF’s registration in the Government Gazette. The FF Plus approached the court after the IEC rejected its application for the BLF to remove ballots.

The FF Plus has been in a fight since February to have the BLF deregistered as a political party. As things stand, voters will still be able to vote in the national election for the BLF on Wednesday, suggesting that the ANC government is hesitant to apply justice and to fight bias.