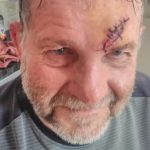 Tommy Swift, 59, and his wife, Maureen, 52, were robbed, tied, repeatedly assaulted and robbed by three men in their home in Myburgh Park, Langebaan, on Saturday. The couple moved from Gauteng to the West Coast three years ago.

“My wife was traumatized and very hurt. They tied our puppy to her back and threatened to cut the dog’s throat if my wife didn’t give them our bank cards PIN. All her teeth in her mouth were loose as they kicked and punched her.

Tommy says that they were lying on their living room couches watching television. They usually wait for their son, Tommy Swift Jr., to come home when he finishes work at night.

“It’s just easier, because then I can open it immediately when he gets home.”

Tommy says their puppy, who lives in the house, was previously restless. He said she kept going to the windows and barking.

I just heard her give one long bark and when I saw them again they were on us.

He let her out just before 1am. “She took a turn and came in.” He says the puppy ran to one of the room windows again and barked.

“I just heard her give one long bark and when I saw them again they were on us.”

The three men allegedly gained access to the couple’s home by removing a window in one of te rooms. They were dressed in black and wore rams.

They overpowered the couple and tied their hands and feet with rags, Tommy says.

Maureen was allegedly repeatedly kicked and punched in the face and Tommy was stabbed in the head and face with a screwdriver.

“I fought back with everything in me, but then the one who surprised Maureen said I should stop fighting back, ‘otherwise we will kill the b**ch.” That’s my wife, I realized they were serious. ”

He says they constantly asked where their safe and money are. “We do not have a safe and do not keep money in the house.”

According to Tommy, they were terrorized for at least two hours. The men apparently turned every room upside down in their home in search for valuable items.

Every television, cellphone, tablet, laptop. . . every electronic item they can sell has been stolen.